So this weekend was pretty kewl beanz, had the emerald across the bay 12k in which i PRed (well it was my first thyme X_X, but 54:33 for a 7:19 avg split, now that split was pretty schaweet ^_^), then a training run @ Dipsea...since we were in the area...lol, and topped off with a sammich monstrosity from Ike's Place in SF. 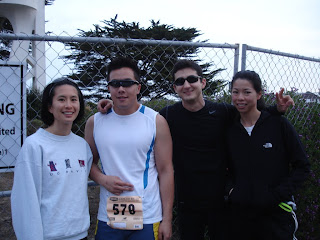 Here are the home skillets with which i partook in the epic weekend~~ My stunna shades = CYCLOPS!! got some noice comments, and a lot of odd looks...lawl X_X 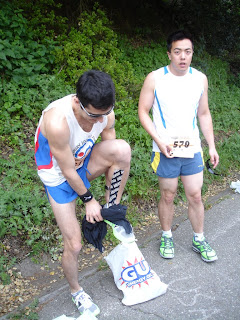 After the bus ride across golden gate to the start area, heres me and jon getting into sexy mode~~ 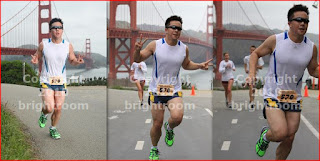 Not too many race fotoz...and they didnt take any of me at the finish for some reason, LAME. U can tell what company took the fotoez by the watermark, but im not gonna buy since they failed to capture my finish T_T~~ stunna shades + neon lime green shoe = race spectacle ^_^ 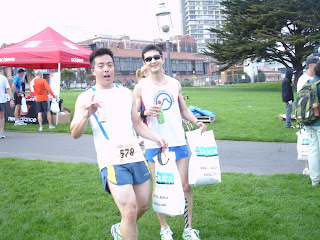 post race, hitting up the FRS tent repeatedly and consuming/stockpiling other goodies 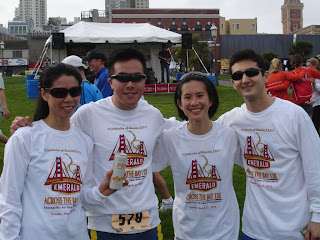 too kewl pho skewl in our finishers' shirts~~ 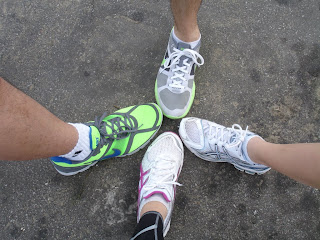 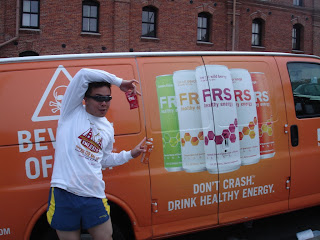 being a FRS groupie~~ taste is aite, i dont think i will pay for it though..lawl~~ hard to tell if it energized meh since we did the dipsea afterwards. diet peach mango has no flavor, X_X 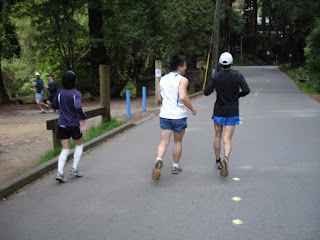 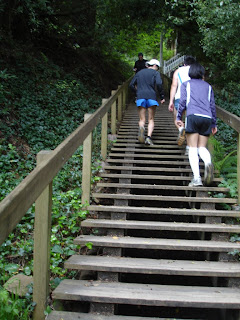 getting 0wned by the freaking 600+ stairs X_X 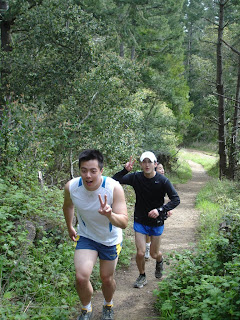 on some random incline, one of the many contributing to the 2200ft elevation gain over the course of the trail X_X~~ 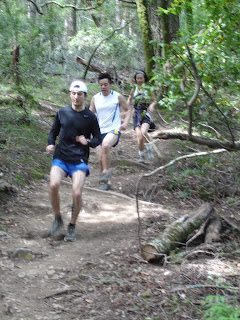 much easier going down...but a lot more pounding....thats what she said~~ 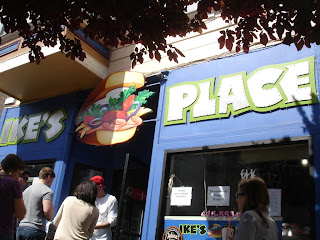 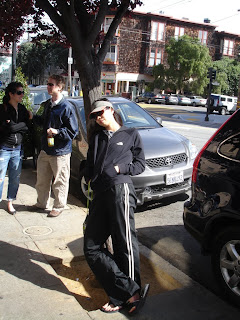 blahaha, someone got 0wned by the 16 miles or race effort runnign we did today. this shot takenw hile waiting an hour in line for the sammiches~~ 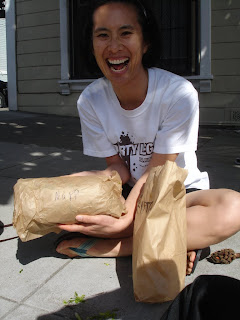 Lindsay got the same sammich I did....which is actually bigger than her head and maybe even her torso O_O! Also,..that is only 1/2 of the sammich...lol 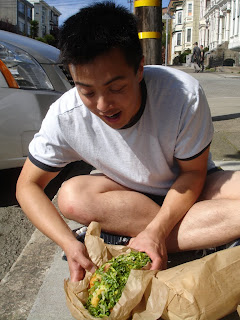 Now that u have an idea of the scale of the sammich (KRYPTONITE), heres me preppin to consume. Theres like a freaking pound of lettuce u have to get thru before u get to the good stuffs tho (Pastrami, turkey, roast beef, salami, bacon, ham, mozzarella sticks, onion rings, jalapeno poppers, avocado, pepperjack, and like a hugeass salad to bulk it all up). 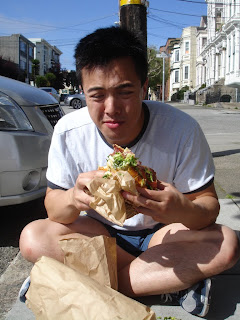 Post race recovery....race was on sunday. Monday i biked to work (12 mi) and swam an easy 2k. Tuesday i ran 7 mi, and today I ran the same 7 mi but also biked to work (12mi). funny story...note to self, BR boxers + abercrombie shorts = 100% thunderthigh chafe...EFF. so every 10-20 steps i had to pull it down caz effing boxers kept riding up and giving me a wedgie. about 4 miles into it i felt the chafe already...and sometimes just screamed out an fbomb, raw and uncut. on top of that bugs kept flying into my mouf, so i swallowed them and closed my mouth...but then theyd fly into my nose and choke me, prompting more profanity. the bugs wouldve been fine if it werent for the painful thunderthigh chafe and shorts/boxer rideup/correction every 20 steps...ugh X_X

Nehoo, i be fellin pretty gewd. almost recubbered, and ready for more hard training. santa cruz half in 3 weeks! prepare to PR!! V(^_^)V