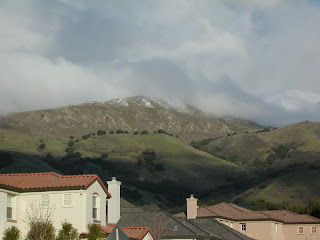 I ran to the top of that (Mission Peak) yday, 1:05, fastest thyme evahh~~ ^_^. I remember when i moved here 2 years ago (50 fatass #s ago), and made it in between the second and third benches (hiking) with my friend ebfore we both gave up and turned around, shamed and treated. Did an easy 3.5mi today, power napped after work and didnt wanna go swimming afterwards (weather sucked outside X_X). Tomollo will be 5.5mi with speed~ 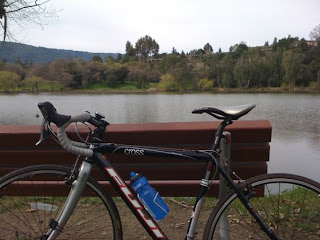 Me and Fi went on a romantic 45mi ride on sat morning. Heres us @ a bench by the lake O_O~~ 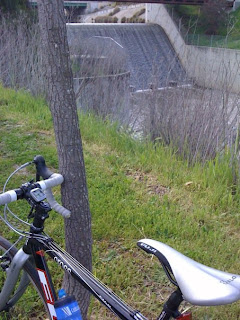 Aaand viewing a waterfall together. I love my treadmill/bike path~~ 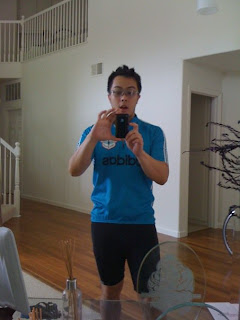 Aunt's haus, pit/pee/poo stop and h2o refill. This is the cyclist's "hat hair"

It was a good weekend. Was not too sore after the bike, so I did mission peak for some strength running. Twas a very reflective and introspective time. Being out on the trail, running or biking, lets u take a step back and think about wtfs up, say hello to God and reconnect, and just enjoy the world. Oh yeah also swam 2000 yds on sat morning before biking. It was a little annoying, some old man doing breaststroke in my lane. I sometimes ponder a business case of an "Athletes Only" gym. No casual quintagenarian+ members, probably not too many obese members. Must be a serious athlete to gain membership (proof of race past or present required). Would that fly?_? I think id pay a premium to work out around ppl who are there to actually work out, and know proper weight/pool etiquette. Iono, maybe if i win the lottery T_T~~

I think ill write more about that later though. I am supah thankful for the support and companionship of mah running pals. People who understand the hunger and the drive. As more people learn about my ironman triathlon and ultra aspirations, the underlying "why?_?" comes up more and more frequently. I had a lot of time to think about it on that bike ride, and the short answer is, it is just a part of who i am now. I grew up the funny fat kid that everyone likes to have around; now that im older, i just subtracted "fat" from my funny fat kid persona. Still love to laff, play pranks, and get outside and explore the world. Being an ex-fatass is just a by product of unleashing that wildchild, so to speak~~

More on this later, need to think a bit more, maybe after a 20 miler~~

Oh one last thing. most guys lust for girls, maybe Man Jose has a large part to do with this, but instead of babes, this bike makes me weak in the knees: 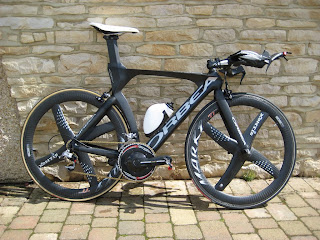