T-2 days left until emerald across the bay 12k O_O~! Thisll be my first short distance race evarr, with my shortest previous race being a half marathon (not counting the 5k leg of sprint triathlon). speedwork over the past few weeks has gone well. I did a bunch of threshold runs @ 12k distance, all under 8 minute average split O_O! I've also been working on sets of mile repeats...I think I was doing them above 7 minutes when i first started a couple weeks ago, but now i can consistently get them below 6:45 O_O, wewt!!~ (also had mah best mile time evarr @ 6:18 yesterday night ^_^)

Oooo0o0o0 i must talk about my new training buddy: 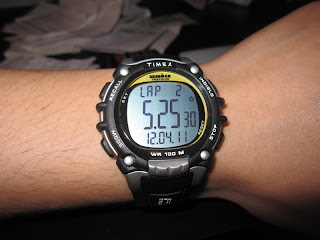 So awethumb ^_^!~! Tracks lap times, does intervals, has alarms, and all that jazz!~~ While run training has been going well, swim training has been hit or miss... had an issue the other day where certain minorities annoying people (4) jumped into my lane and kept trying to race me in the middle of my 500yd sets. I just ignored them and kept on going with my workout plan (smoking their lame asses in the process), but also kept getting paranoid that theyd do something dick like pee in my lane or jump in on my back or some crap like that. they also kept getting in the way...its already hard enuff to circle swim with 4 teammates in one lane...freaking hella annoying when its with random noobs. meh, it annoys me to think abt it again so will just hope they were only there for 1 night. It seems like there is only a 1.5 hour window each night in which it is safe to go swimming @ local 24 hour fitness.....if u go before that window, it is too crowded with non-swimmers and noobie blockers crowding up the lane. If you miss the window and go in late, you run into your usual late night douchebags that you usually see lifting (or dropping) weights, trying to look big. Either way, go at the wrong time and it pretty much ruins the workout, efff...

Anyways, nuffa that depressing crap. Pretty stoked about the race this weekend. Gonna eat a tasty sammich afterwards, run the dipsea trail, and hit up roadrunner on the way back to use mah $20 lawsuit voucher, w00t~~ Hopefully can look even more awesomer than this pic i found of the sprint tri run leg: 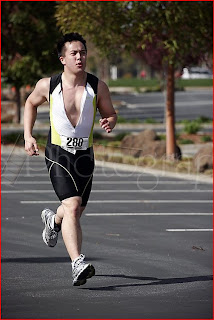