Oh, hai~~~ Here I am 1 day out from the Stanford Treeathlon. Am pretty worried about race day diarrhea and other annoying crap like that. I went for an open water swim last weekend with my friend joanna, and omfg it was hella cold...perhaps mid 40° water..X_X. I couldnt even put my face in for more than a few strokes, and when i first jumped in, i couldnt move and was gasping for breath for a minute or two....major ruh roh to worry about come race day. Did a hard 15 mi bike after that....hips and quads major hurted for a day or 2 X_X. I breally need to practice more long/hard rides and also brick some runs into that training too. Quarry lakes is a super noice place to train dough...imma prolly go back if i sign up for another tri. Open water swim plus long and uncrowded trail nearby, win O_O~!

Here are some pics of the gear i picked up @ sports basement. Love the parties that give u 20% off...too bad i couldnt couple it with mah AAA 10% discount, else it wouldve been a hella good deal O_O~~ 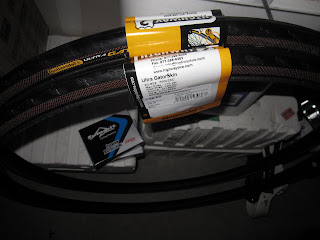 700x23c Continental gatorskins. lots of good feedback from friends that ride these. flat resistant and much less rolling resistance than my current 700x30c treads. 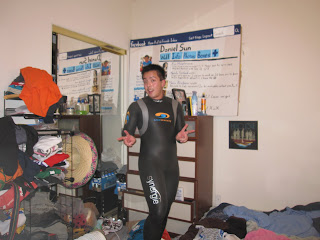 Blueseventy synergie wetsuit. I wanted an orca sonar, loved the feel and fit...but they had the 2009 models on teh same rack as the 2010s...so when i got to the register i found out it was $70 more den i tot...so had to bring it back and find anudder one T_T. 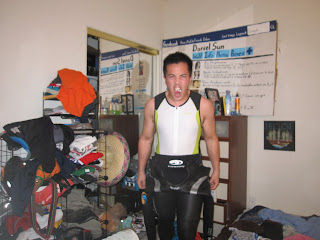 Halfway thru T1 transition. As soon as i get out of the water, unzip wetsuit halfway and run to transition area. Tri suit is underneath and ready to go~~ 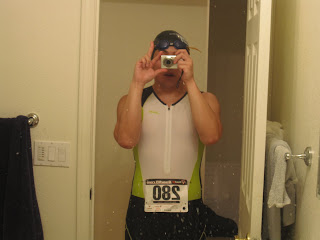 Reading up on pre-race nutrition, and coupled with my hyperactive GI tract, I will avoid eating any fiber whenever possible for the next 24 hours. Im not sure if its all the training, or all the fiber i normally eat...but i have to crap liek 2x a day and it feels super gassy and painful, but comes out smoothly and almost diarrhea-like. Its pretty annoying...but at least it isnt real diarrhea...?? Imma be hella pissed if it happens on race day dough X_X.

Went to pick up my race packet today and ride around the course to get an idea of what i'll hab to go thru tomollo. It was prettyWindy™, but with a lot of smooth patches of road, and some ruff ones. Got there too early and rode around, ran into one of the race coordinators (Keeren or Karen) and helped set up stuff. She looked liek she could pwn mah noob ass tomollo, and prolly will. But got some info and chitchatted abt the race, so that was kewl beanz. Saw a lot of cars ride in with pretty awesome bikes....yoikes! some cervelo and orbea, all TT bikes...

This is Fiorella, mah bebe i will ride tomollo. Those super thick tires gonna be replaced with some thinner slicks. Perhaps I will need to get her a TT companion later if i decide to get super cereal about triathlons O_O~~

Oh I also worked on my transitions earlier this afternoon...it went sumpin like this:

1) Run to bike cleats and put them on
2) Put on helmet and shades
3) Get on bike, clip in, and ride around the block
4) Take feet out of cleats while riding and continue pedaling back to my stuffs
5) Dismount, get into running shoes, run off~

Did it about 10 times, first time was around 02:30, got it down to 02:07 by the last run. Race day will be more complicated with the wetsuit and other peopels crap in the way, but i feel much gooder having practiced it today~~

Ok thats all for now, RACE TOMOLLO!!~!~ X_X
Posted by TriathleteinTraining at 10:12 PM